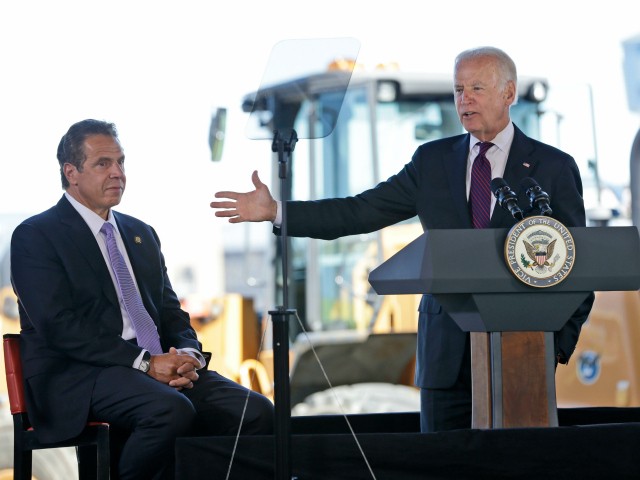 A national poll commissioned by the Club for Growth reveals that a majority of Democrat respondents — 56 percent — said they want New York Gov. Andrew Cuomo, not former Vice President Joe Biden, to be the 2020 presidential nominee.

About 44 percent of respondents said they would stick with presumptive nominee Biden.

The New York Post reported on the poll results, spelled out in a “confidential” memorandum from WPAi, which surveyed 1,000 likely voters on April 3-6:

Hispanic voters, young people, women and self-identified liberals are most likely to favor dumping the former vice president for Cuomo.

Cuomo denied last month that he wanted to run for president, but some Democrats still are clamoring for an alternative to Biden, who faded from public view during the coronavirus outbreak, which elevated Cuomo in daily press conferences.

“With every major news event, Democrats realize more and more how bad of a candidate Joe Biden is, and Democrats now preferring Cuomo is just another example,” Joe Kildea, Club for Growth vice president of communications, told the Post.

“Poll sampling was done to be representative of different races, geographic locations, genders, educational levels and ages,” the Post reported.

The likely voters were asked, “Based on what you know today, do you agree or disagree that Democrats should nominate Governor Andrew Cuomo for president instead of Joe Biden?”

“Among people of any party — including independents — who voted for Democrat Hillary Clinton in 2016, the percentage favoring Cuomo increased to 57 percent,” the Post reported. “Of those who voted for President Trump in 2016, 53 percent wanted Democrats to keep Biden.”

Regardless of party affiliation, younger voters ages 25 to 34 tallied 66 percent for Cuomo, as 57 percent of all women picked him, and 58 percent of Hispanics chose the governor.

The margin of error for the poll is plus or minus 3.1 percent.